The monumental architecture of Sanxenxo and its surrounding municipalities, is obligatory reference to know their origins and thus to understand their lifestyle. Religious buildings, stately homes, squares, manor houses, granaries and stone crosses. Along with them, the museums bear witness to the culture, history and idiosyncrasies of its people. And we can not forget its archaeological remains, which are in turn complement to an overview in this section dedicated to culture.

PARISH ADINA Church of Santa María de Adina: Temple built on another Romanesque the year 1170 the walls and the eaves are preserved. The chapel is the sixteenth century and has a vault. Chapel of St.

Catherine: It is a simple chapel of a single rectangular ship located in the old quarter of the town of Portonovo. It is dedicated to the patron saint of this people, by which men feel great devotion of the sea.

PARISH bordons Church of San Pedro de Bordóns. A single nave divided into three sections with external buttresses. Inside the temple is a Romanesque font and the wall surrounding the church there are two fronts Baldaquino.

Church of San Juan de Dorrón: It was built in 1764 on the remains of a Roman temple, of which remain today the walls and eaves of the ship. In its interior a baroque altarpiece of 1775 high quality, has a rectangular nave divided into three sections and a Romanesque baptismal font.

Pazo de Bermúdez de la Maza: Built in the fifteenth century plant as "L", basement and a floor. There are still remains of a tower when the building was medieval structure. The farm has a barn with ten pillars.

Dorrón Castro: It is a fortified settlement belonging to the Iron Age, VIII century A.C.-D.C.

PARISH OF NANTES Church of Santa Eulalia de Nantes: Contemporary Construction of 1965. In the courtyard of the church are some architectural remains of the pre-existing Romanesque church.

O Holy Chapel: Built in 1591 and one rectangular nave. In its main facade it has a shield where two oxen symbolizing those who brought the abbot of Nantes to facilitate construction are represented .

Pazo La Maza: Located in the valley of Santa Eulalia, Nantes. Built in the sixteenth century, the estate features a granary with seven pairs of pillars.

Chapel of Our Lady of A Lanzada: Erected in the years 952 and 968 by Bishop Sisnando II'd go to defend the lands of Santiago, it is the late Romanesque style, with very large apse and corbels under the eaves. In its construction stones from an old chapel from the time of the Christianization they were used.

Church of Santo Estevo de Noalla: Stands out as the most monumental of the municipality of Sanxenxo. Since its entrance there is a magnificent view of the Ria de Pontevedra. Preserved Roman remains, but the bell tower was added in the eighteenth century. In this church they are assigned the hermitage of A Lanzada and the Chapel of San Juan de Aios.

Chapel of San Juan de Aios: Small building a single rectangular nave. Pazo de Quintáns Noalla. Built in the seventeenth century, it is a building with ground in the form of "L". Surrounded by a magnificent wall ashlar granite worked very well; other elements of interest are a seventeenth century chapel and a large barn.

Archaeological Remains A Launched: Here it should be noted the discovery of a necropolis and castrate whose excavations began in the fifties. Castrate the eighth century B.C., while the tombs found in the necropolis for the III-IV century D.C. 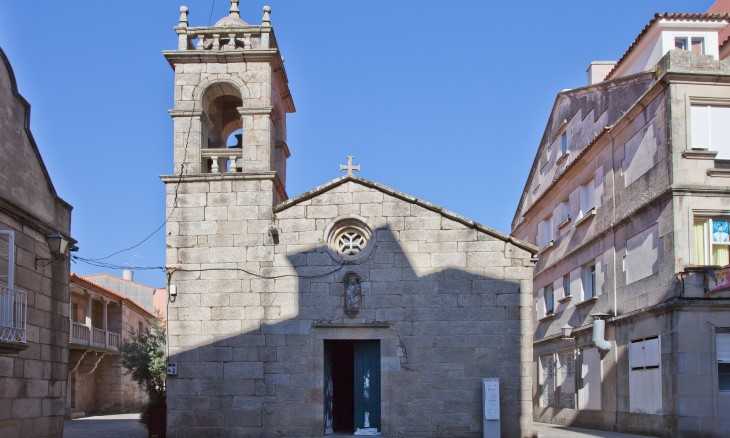